Of the town council and spooky mansions

Last time we left our heroes, they had travelled to the village of Saltmarsh; a small fishing village in the Duchy of Mercia. They awoke to the cacophony of the barks and shouts of fishers going around their daily routine. Rising from their respective slumbering places, the heroes converged at the breakfast table, only to be interrupted by two of the local watch. The soldiers explained that they had a summons from the town council. Leaving the Drovers House, the party were escorted through the streets to the council chamber.

Inside the stone building, they were introduced to two members of the council- well-spoken and dapper older gentleman with a neatly trimmed beard who went by the name Gellen Primewater. The second councillor stood on a wooden leg, but still cut an imposing figure; he introduced himself as Eliander Fireborn, the captain of the Saltmarsh Guard.

Eliander asked what the party’s plans were, explaining that a troubling rumour had reached his ears- the news that the group were looking to enter the old Baldrus Estate. Gellen quickly interceded and explained that while uninhabited, such actions would constitute as breaking and entering. Additional, the council, was concerned with the populous’ reacting to the ruins being’ disturbed’. After all, fishers are a superstitious lot, and many believe the manor to be haunted. William explained that the party meant no harm and were indeed acting lawfully. William then produced the letter and contract prepared by Benjamin.

Reading over the note, Eliander seemed convinced that they where operating with the authority of the estate owner. Gellen wasn’t so easily convinced, stating that the seal would need to be compared to the council records, to ensure it’s validity. Such a process would take time, and the heroes were instructed to return after midday. Theseus offered to help the archivist with his work, an offer which was gratefully received.

With several hours on their hands, the rest of the party decided to explore Saltmarsh. Their first stop was to visit the town’s resident wizard. They approached his abode to find a sizeable three-story tower. Entering they were met by the mage Keledek; a large 7 foot tall human, with olive skin and wearing a bright crimson turban. William introduced himself in his usual verbose manner, only to learn that Keledek was a man of few words. Keledek was brusk and too the point, encouraging the young mage to do the same. They asked Keledek what he knew of Baldrus Estate, and how they could combat ghosts- if they discovered that t was indeed haunted.
The huge mage opened a cupboard, and upon placing his hand into the dark interior, a book materialised in his hand. Reading it over, Keledek advised the heroes that the last registered inhabitant of the manor was an alchemist by the name of Xx. The alchemist was reported missing and after some time was assumed to be dead. The estate has lain empty since. The heroes also learned that if they did encounter ghosts, either holy water or holy oil would be beneficial. Before leaving, William enquired what Keledek’s specialisation was, finding out that Keledek specialised in magics that allowed an individual to transcend planar boundaries.

Deciding that their next course of action should be hunting down some holy water, the party headed to the temple, collecting Theseus on the way. Entering the temple, they found a central chamber which led to five different shrines, each consecrated to a different member of the pantheon. They met the presiding priest, Wellgar Brinehand, a former whaler. After Theseus charmed the priest, with a little help from one of William’s illusions, the present gave them some holy water. All set the party returned to the council hall.

In the council hall, they found that only Eliander was present; Gellen had excused himself attending to important business. Elainder explained that the seal was genuine, and the party had the blessing of the town council to proceed. As they set off on the two-hour journey, the party was suspicious of Gellen’s absence. Shiloh, lent their skills as a tracker, noticing that a fresh set of tracks had set off for the estate some hours earlier. As they drew nearer the property, Shiloh and Autumn spotted several goblins attempting to set an ambush. Quick to act, they informed the rest of the party and attacked the goblins.

The battle was hard-fought. Shiloh deftly moved to the edges of the battlefield- picking off the goblin archers, while Theseus and Hekate took one flank as Autumn and William took the other. With such a robust, coordinated attack, the goblins were launched into disarray and fell quickly. Pausing long enough to patch their wounds and catch their breath, the group headed on to the old manor.

The decrepit house sat on the highest ground in the area, the surrounding stone wall crumbled. A large ornate metal gate, lay ajar, swaying Slightly in the wind. The gardens, once meticulously planted, now wild and overgrown. The house itself stood tall, with the gabled roof having collapsed in several places. 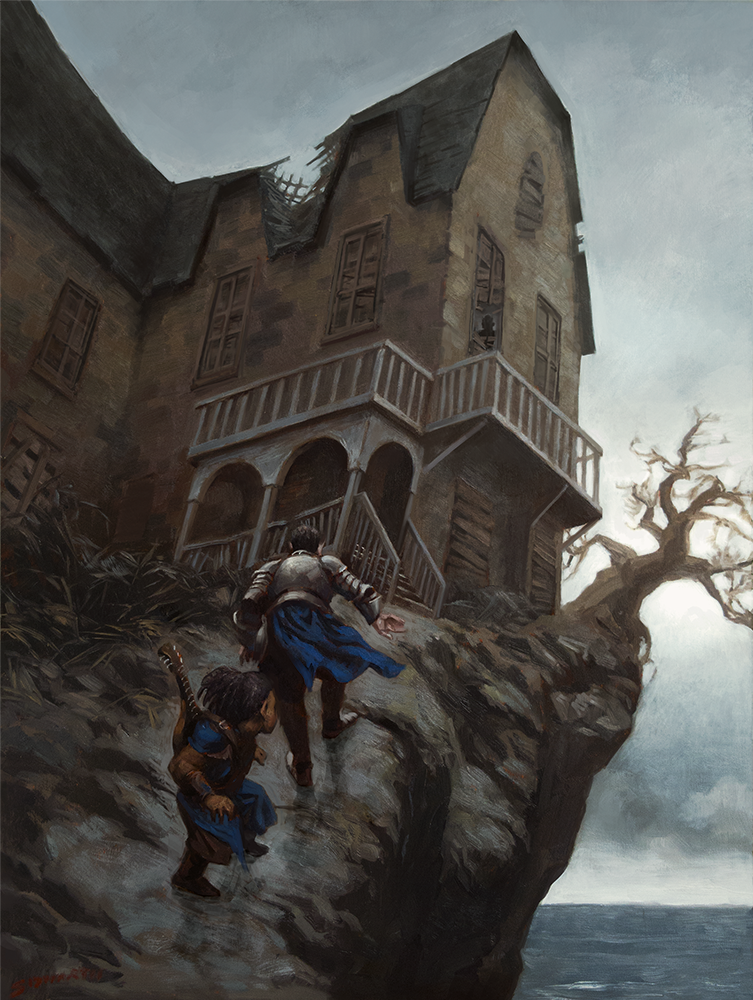 As the party sat resting, they noticed a pale face at one of the upstairs windows. It disappeared as quickly as it was spotted. Both Shiloh and Hekate, scouted the exterior of the house, drawing a rough map. They were aided in this by William’s squirrel familiar, who scurried around the outside of the top floor. The house appeared empty bar one of the bedrooms, which seemed to contain a hogtied and gagged human. Deciding that this individual may need help, the heroes entered the building.

As they made their way upstairs, it was noticed that at least two other people had been here before. They opened the door to the room with the prisoner, only for Theseus to stride in and fall through the rotting floor, he was able to rejoin the rest of the group with his pride a little dented. Untying the prisoner, he introduced himself as Ned, a wandering vagrant who spotted the house, and decided it would be an excellent place to stay. As he was exploring the building, he was attacked from behind, knocked out cold and came around in his predicament. Ned offered to join the heroes, at least until they could escort him back to town.
During this conversation, William noticed a sound in the attic and sent his familiar up to investigate. As the squirrel entered the dark space, William let out an audible cry, as he felt his familiar destroyed by some unseen attacker.

Ascendant campaigns can view previous versions of their pages, see what has changed (and who did it), and even restore old versions. It's like having a rewind button for your campaign.

We've already been saving your edits, so if you upgrade now you will have instant access to your previous versions. Plus, you get a 15-day free trial, so there's nothing to lose.

I'm sorry, but we no longer support this web browser. Please upgrade your browser or install Chrome or Firefox to enjoy the full functionality of this site.